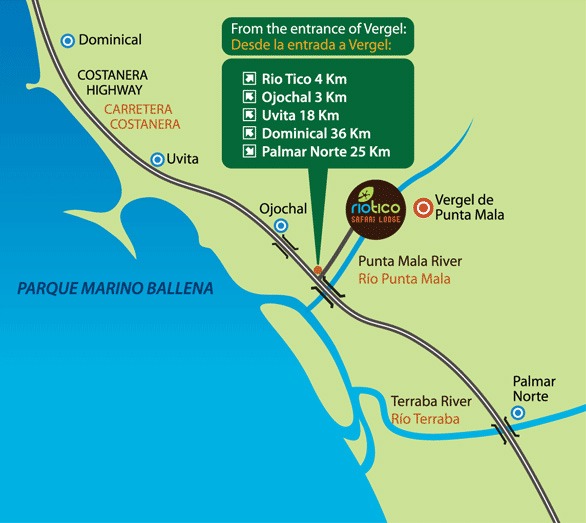 The Rio Tico Safari Lodge is located in Vergel de Punta Mala on the Southern Pacific coast of Costa Rica. There are several transport options to choose from: driving a rental, taking a local bus, taking a private shuttle bus or taking a short domestic flight.

Own transport from San José

From San José you drive to the Pacific coast on the autopista from San José till Caldera (nr. 27). You will leave the autopista 27 at the exit Jacó and drive south following the coastline. You will pass Jacó, Quepos, Dominical and Uvita. There are some beautiful views of the Costa Ballena coastline on the right side of the road and on the other side the rainforest. After approximately thirty minutes, you will pass the village of Ojochal. Three kilometres south of Ojochal (km 179) you’ll see two yellow bus stops on both sides of the road. Before the bridge you turn left and you follow the signs to the Rio Tico Safari Lodge. This unpaved road is accessible by a two-wheel-drive-car throughout the year. After ten minutes you will arrive at the Rio Tico Safari Lodge in Vergel de Punta Mala.

Would you like to explore Costa Rica with a rental car? Please contact us. We offer different types of rental cars from a renowned international company for a very good price.

From San José TRACOPA buses leave several times a day to the southern part of Costa Rica. The buses that will follow the coast road will pass Uvita. Ask in advance, because there are also buses which follow the Interamericana. In Uvita there are taxis waiting for you to reach the Rio Tico Safari Lodge in Vergel de Punta Mala. Also, a private company, Easyride, has a hotel to hotel shuttle service within Costa Rica. Please contact us if we can assist you with making any reservations.

SANSA airlines and NatureAir have one daily domestic flight each from San José to Palmar Sur. This short forty-five minute flight with the Central and Southern Pacific coastline on your right and a 10,000 foot plus mountain range to your left is simply gorgeous. From the Palmar Sur airstrip you can take a taxi to the Rio Tico Safari Lodge.